May 30, 2021
International Traineeships- Where did the students go? 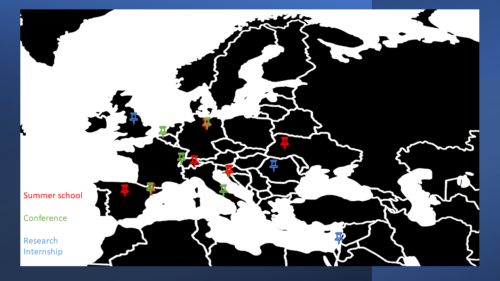 International Traineeships- Where did the students go?

Get to know Dr. Dounya Schoormans!

Get to know Paul Lodder!

Get to know Kim de Roover!

The Social Secret of Health

We all know that we should not smoke and that we should exercise more often. Also, we need to eat healthy, apply more sun cream, and put on a coat when we go outside while it’s raining. Why? Because it is good for your health. (And especially in the Dutch weather you might catch a cold without that coat). But when was the last time that you texted somebody about a nasty cold that he or she replied with: “if you want to get better, perhaps you should invite your friends over to spend some time together”?

You probably need to dig deep for that one. And that is not unusual as the common advice is to get some rest. Of course, getting some rest is almost always a great idea but… is it so ridiculous to suggest seeking out social interaction when you don’t feel well physically?  In 2010, Holt-Lunstad and colleagues published a meta-analysis that is still influential today. In their paper, results from over 148 studies were integrated in which individuals’ mortality risk was measured as a function of social factors. Although I am aware that switching from a cold to mortality risks is quite a transition, let’s go through their findings and see if we can find our answer there!

After all analyses were performed, Holt-Lunstad and colleagues found two key social factors that reduced mortality risk among individuals. The first factor is social integration (e.g. the size of an individual’s social network or his level of participation in social activities). The second factor is social support (e.g. the individual’s level of perceived support from the social network or his level of perceived loneliness). Remarkably, Holt-Lunstad and colleagues found that the effect sizes of these two social factors were even somewhat larger than those of the nine most important health behaviours that individuals can engage in*.

Thus, it seems that being socially integrated and feeling socially supported can be even more protective for your health than for instance not smoking and exercising on a regular basis! Why is this not common knowledge?

Why are those super powers a secret?

Many studies on this topic, including the one by Holt-Lunstad and his colleagues, conclude with the notion that social factors are being neglected and underestimated in relation to physical health. Perhaps not in social science anymore, but in society it definitely is. When governments or institutions try to promote physical health among individuals, they only send out messages such as “quite smoking! ” or “drink less alcohol!”. And maybe that is why concepts like social integration and social support do not automatically come to mind when we discuss factors that can protect our physical health: because nobody is reminding us, the people, about it.

As a matter of fact, it has been a popular assumption for years that individuals underestimate the importance of social factors due to neglect by people in key positions such as doctors, educators, governments and the public media. However, this assumption was never empirically tested until last year by Haslam and colleagues.
The findings of Haslam and colleagues’ confirmed the first part of the assumption: individuals indeed tend to underestimate the importance of social factors. While participants were able to indicate quite accurately how important several health behaviours were, they could not do the same for social integration and social support.

But is that due to neglect by key figures?

Importantly, individual differences were found in accuracy. Men, younger participants, participants with lower education levels, and participants with a Right-Wing Authoritarianism ideology tended to underestimate the importance of social factors more than their counterparts.

Based on logic and prior research, most of these differences can be (partially) explained. Women, for instance, tend to attach more value to social contact than men do on average. That makes it more likely that they have higher levels of awareness of the importance of social factors. Next, older participants and participants with higher education levels both have had more opportunities to learn about social factors than their counterparts have. Finally, individuals with a Right-Wing Authoritarianism ideology value the opinion of authority highly. Thus, if doctors and governments for instance do not advocate the importance of social factors, this decreases their likelihood of acknowledging its’ importance.
Perhaps you have noticed how some of the explanations are in line with the second part of the assumption. However, this is all indirect support! More direct examination of why individuals tend to underestimate the importance of social factors is needed.

In short, it seems to be the case that individuals indeed tend to underestimate the importance of social factors like social integration and social support. This could be happening because individuals are not receiving enough information about social factors. If that is true, it appears that it is up to key figures such as doctors, educators, governments and the public media to change this.

That being said, can we answer our initial question? Is it a ridiculous idea to invite friends or family over when you do not feel well physically? Well, although we are not sure yet whether it also works with a cold, I think you could definitely give it a try. Let’s not underestimate the power of social factors! (But try not to infect everybody with that cold).

Do you agree that social factors are neglected and underestimated with regard to physical health? How could we raise more awareness among all individuals? And do you expect that social factors will also protect us against smaller health issues such as colds? Leave a comment below and let us know what you think!

*The nine most important health behaviours are 1) not smoking; 2) quite smoking; 3) consuming low amounts of alcohol; 4) receiving flu vaccination; 5) exercising regularly; 6) being physically active; 7) not being obese; 8) receiving drug treatment for hypertension; 9) not being exposed to air pollution.

If you are interested in reading the articles mentioned in this post, references and links are provided here: